The store will not work correctly in the case when cookies are disabled.
Add to Wish List Add to Compare

Copy this link and share it with your friends.

The rifle case’s version of a microphone drop 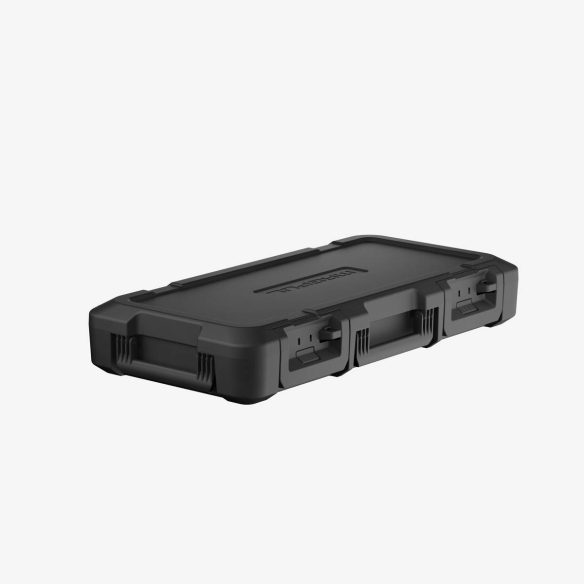 Skip to the beginning of the images gallery
TOP

Magpul DAKA Hard Cases were designed to fix the many shortcomings of current hard case offerings, providing a stronger, easier-to-use, and more reliable transportation and storage system. Combined with the transformative features of the DAKA GRID Organizer, our DAKA Hard Cases represent a quantum leap in capabilities and features. Streamlined with minimal potential snagging points, easy to maneuver, and full of usable protective space, they include advanced features such as better latches, recessed lock housings, ergonomic handles, and dependable wheels, all in a package that provides greater protection for your important gear.

Built around the uniquely customizable DAKA GRID Organizer, each of the three DAKA Hard Cases is designed with specific rifle and gear needs in mind. The C35 accommodates shorter carbines comfortably, along with much of the additional support gear and accessories you’ll need to travel with them. The GRID is made of individual Expanded Polypropylene (EPP) end Panels, center Panels, and DAKA Blocks that nest securely together to create an advanced internal system that organizes and protects everything in your case. The DAKA Blocks are easily pressed into the GRID Panels and are just as easily removed and reinstalled to fit the specific needs of what you’re carrying each time you pack up your case. As opposed to traditional foam inserts, the GRID doesn’t trap moisture, dirt, or other contaminants, and GRID wipes clean with a damp cloth. It’s lighter and endlessly customizable, allowing you to maximize more space inside your case. It’s also stronger and holds your gear in place better than traditional foam, providing better protection all around. Changing the arrangement of the GRID to meet your loadout’s needs is easy, fast, and you’ll never have to deal with the many issues that come with open cell foam.

The latch design, along with the greater case rigidity, makes the latches simple to use and incredibly rugged. Each latch features a large, easily operated push-button release that can be activated with one hand. When pressed, the latch opens and remains in the open position, and it can be used as a handle to open the lid. The latch closes with simple downward pressure anywhere on the latch body, and there’s a clear audible “click” when it’s secured. The innovative latch design also features a reimagined latch lockout system. Each latch contains one lock pass-through and, once a lock is installed (a 5/16” shackle lock is recommended), the latch cannot be opened until the lock is removed. Additionally, each latch features a lock housing and a zip tie pass-through that allows the user to secure the lock to a recess in the latch, protecting the lock and the case from damage due to impacts or from having the lock snag on something. Including the latch and lock attachment points together mitigates the risk of your case opening or having the lock snag and rip free.

Nesting lugs on the Hard Case provide a positive interface when multiple Hard Cases are stacked on each other, and two built-in strap recesses keep ratchet straps in place and secured during use. There are two, large main handles that are easy to manipulate under load, and a third, integrated handle near the wheels makes the case easier to move and allows it to stand vertically on its own. The handles have cross sections that are modeled on Magpul pistol grips for greater comfort and control, and they recess completely into the case’s frame. They’re designed to stay open once they’re extended and stay closed when stowed. The wheels are designed for smooth rolling and longevity, with reduced noise, friction, and debris incursion thanks to the ball bearings, rubber overmolding, and reinforced polymer hubs.

Made in the USA.

DAKA GRID Organizer Panels and Blocks are lighter, easy to use, and customizable for every loadout

The GRID doesn’t absorb moisture, dirt, or other contaminants like open cell foam, and it wipes clean with a damp cloth

THE DETAILS THAT MATTER FOR A GREAT CASE

Case frame includes lugs at the base that interface with the lid, allowing cases to nest together

Two cammed, push-button latches can be opened and closed with one hand

Lock and zip tie pass-throughs secure locks within the latch and streamline the case, preventing impact damage to the lock and the case

HANDLES ARE COMFORTABLE AND FUNCTIONAL

A third, fixed handle located adjacent to the wheels makes gripping and maneuvering the case easier